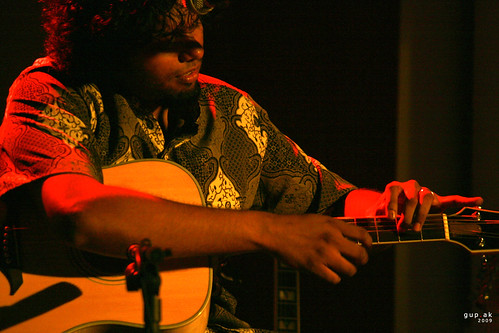 Kyra is the kind of place Bangalore needs. A venue planned around performance, acoustically designed, with a good-sized stage, appropriate sound installation, lights… They call it a ‘dinner theatre’, and it’s a bit odd on stage at first; dinner tables are set right up against it, and the audience is seated in vertical rows so they can turn a few degrees to watch. But it sounds good in there. The ‘atmosphere’, we’re sure, will follow soon enough. And by the number of acts performing there already, that shouldn’t take too long.

Sound check was early this time around – we were supposed to do the Live Gig at the Music Strip in Cubbon Park in the afternoon, in memory of Sunbeam Motha. Straight away, we know this is going to be a good gig – there’s a nice drum kit, everything works, and it sounds good even without the warm bodies of your audience to soak up those frequencies. You know how it is sometimes in these indoor gigs – soundcheck is one big boomy waffly affair with random howls and suspicious wolves (notes, that is). But here, everything is nice and tight. You feel like digging in and playing.

Trek to Cubbon after soundcheck to find everyone rather sodden with rain-grief. One brave band manages to belt out one song standing in the freshening drizzle. Interestingly, there was a blue tarp being held over the dry drummer, who, not being plugged into anything with electrons buzzing through it, wasn’t in much danger of said electrons fizzing up his nostrils or anything. The guitar player and bassist dripped – but walked off unscathed. Kudos! Needless to say, that Gig was called off before things got any Live-lier. Hope to play there again another day.

Back to Kyra – we start just after 8 (nice minty chocolates, those), with our brand new version of How Can I Get Your Groove. Nice crowd in there – can see some regulars, new faces… and they’re singing along. Do our still-cooking version of It’s Probably Me and jump into all the brand new stuff – Jazz Yuppies, The Song, Mighty Strange – and all of it is going down well, I say! 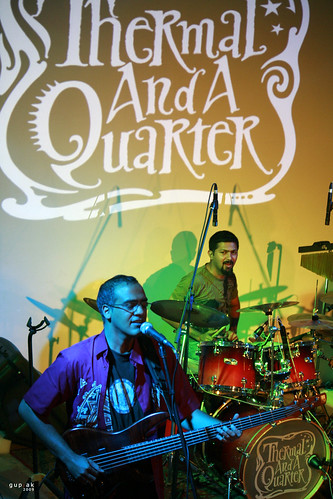 Pony up for the acoustic set and actually manage to pull off Andy McKee’s Drifting without completely mangling it. Rzhude also steps up and does some old favourites before getting in an acoustic version of Brigade St. Second set has all the usual suspects – Jupiter Café (The Work Song cropped up again in the jam) Chameleon, Simply Be (which went down really well) with grand set-closer Motorbyckle. Gave away our free This Is It CDs for all those designated drivers, signed a few. Good gig! And the food is pretty good too…