The Shut Up and Vote Tour Diary – 1 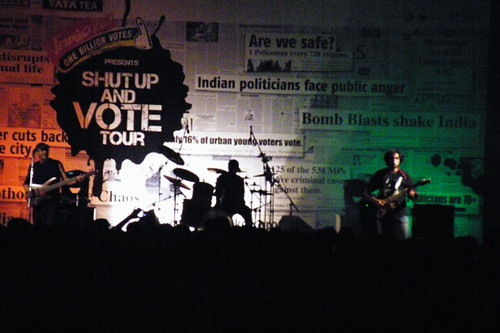 TAAQ kicks off the Shut Up And Vote Tour at IIT-Madras, Chennai

The heat. The dust. The burden of the beast… Chennai is a true ‘Look At Me’ situation. Love it!

IIT OAT – the last time we played here was at least eight on nine years ago – when the Greenpeace Rainbow Warrior was docked in Chennai’s port, sounding a clarion call for ‘No More Bhopals’. Was a great gig then (will always remember this one moment: everyone in the crowd was given a candle and asked to light it at the same time… never seen so many stars in the audience like that before – it was stunning); and last night was no less. 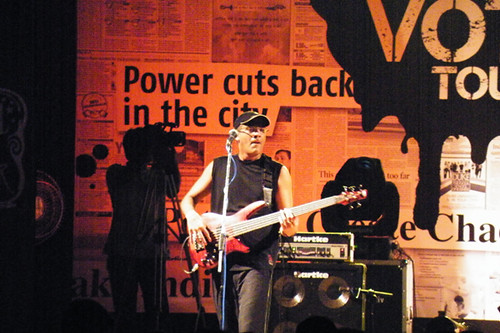 Rzhude on bass at IIT-Madras, Chennai

Soundcheck doesn’t quite go according to plan; there’s some conference going on and the Dean keeps ringing us to say ‘Oldein’ (travelers on B’lore buses will know that distinctive sound). But it’s all looking good… the backdrop, the lights, the stage.

Chennai band Greyshack open the gig and get the crowd going with a high-energy medley. We get on after a quick AV and intro; start with Shut Up And Vote and crowd is already roaring. Nice! 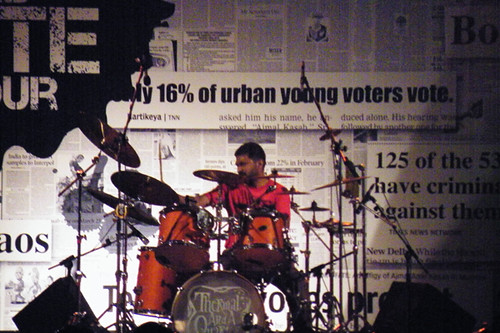 Rajeev on drums at IIT-Madras, Chennai

Saw a few Walkie-Taaqies in front singing along to Paper Puli, Look At Me, etc. One Small Love was one of the highlights; used good friend Angshuman’s Taylor acoustic (need more work on getting it to sound right, though) and played the video on the AV screen. Happy lads, kudos! Every pair of hands in the audience spontaneously came together when Rzhude drew that smile on… It was a great moment. 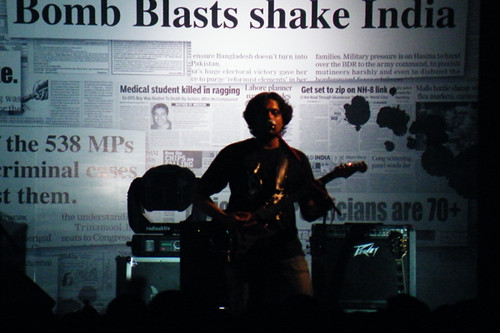 Bruce on guitars and vocals at IIT-Madras, Chennai

Wrap up with Humpty Dumpty, Chameleon and finally, Motorbyckle, complete with sound effects.

Good Gig! Hope we got folks to at least start thinking about the message. Make a date with us – the tour is coming to your city, or at least close!

On to Kolkata now. 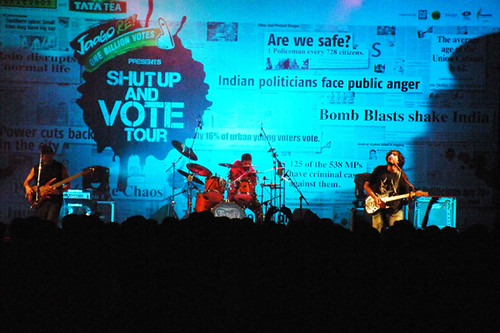 TAAQ performs at the Shut Up and Vote tour at IIT-Madras, Chennai